The whale shark originated as a species over 60 million years ago. The whale shark is a pelagic filter-feeding shark and the world's largest fish. There are unconfirmed reports of whale sharks reaching almost 15 metres long and weighing at least 30 metric tons.

Not surprisingly, whale sharks hold many records for sheer size in the animal kingdom, most notably being the largest living non-mammalian vertebrate, even rivalling many of the largest dinosaurs in weight.

Gentle giant of the deep, a whale shark
cruising the Tioman area

Despite their incredible size, whale sharks don't pose any danger to people, because they're quite docile. So docile, in fact, that they may even allow divers to catch a ride by holding on to their dorsal fin. Younger whale sharks particularly, are actually quite gentle and can even be seen playing with divers.

It is this docile, playful nature, along with their immense size, that makes whale sharks such a popular subject in the world of scuba-diving. And divers in Tioman always stand a better than decent chance of coming across a whale shark, because the friendly behemoths are known to migrate along Peninsular Malaysia's east coast twice a year.

Most of our whale shark sightings occur in May and October, but you can come across a whale shark pretty much any month of the year around Tioman, apart perhaps during December to January, the monsoon period. 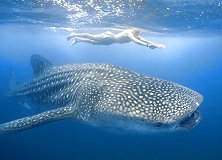 If you want try and to come face to face with one of our friendly whale sharks, use this form to apply for a scubadive licence or a snorkeling excursion.