The monsoon in Tioman lasts from about from late November to February, although being a weather phenomenon, it can set in earlier some years and later in other years. Peak monsoon month, normally December, tends to be blustery and generally wetter than the rest of the year.

During the monsoon, the island's usually calm sea changes to a cauldron at times; high swell and waves, up to 3 meters or more, are no exception. 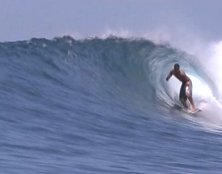 Due to this more choppy sea state and the resultant lower water visibility, scuba diving and snorkeling tend to be less enjoyable during these months. In addition, some of Tioman's exposed beaches may get washed away. So, keep in mind that, together with the higher rainfall, Tioman's generally sunny disposition is perhaps a little less cheerful in this period.

The good new is that, fortunately, all of these monsoon effects reverse the moment the monsoon starts to retreat, mostly by January.

The other good news is that it's not all doom and gloom by any stretch. To wit, some of Tioman's resorts are now staying open during these traditionally closed months. The reason for this is that within monsoon season, there are long spells of clear sunny weather with the clearest skies and the bluest heavens. This applies particularly once the rainy spell has petered out, oftentimes by end of December.

In fact, with the humidity down considerably and a constant cool-ish northeasterly breeze blowing day and night, Tioman's "monsoon summers" have a crisp almost Mediterranean feel. Ideal for an escape from the European winter. And given the ever-growing numbers of monsoon season visitors in Tioman, it's clear that more and more travelers are catching on to the appeal.

The past few years, we're also seeing more activity based on the very decent surf that the monsoon brings to Tioman's shores, especially on its eastern side. Together with Tourism Malaysia as their main sponsor, Tioman's locals have, organized a surf contest in the village of Juara.

Past editions of Tioman Surf Festival as it's called, have successfully drawn in respectable numbers of surfer hopefuls from Malaysia and further afield, all keen to have a go at the prize money and sponsor-donated goodies that are up for grabs.

All of this being said, please note that during the monsoon, the ferry service between Mersing and Tioman may at times be temporarily interrupted, or even cancelled a few days back-to-back. In any case, when taking the ferry during the monsoon months, best be prepared for the possibility of longer than usual waiting times.

Tip: Got your ferry tickets from us? Follow our *Tweets to stay up-to-date to the latest weather/departure timetable adjustments. *Terms and conditions apply.

If you have any questions about the monsoon in Tioman, use this form.