From scuba-diving dozens of meters below the surface of a turquoise sea to over 1000 meters up, your head literally in the clouds. Explore Tioman's Mystery Mountain, Gunung Kajang. Towering over 1038 meters high, the often cloud-shrouded and extinct volcano Gunung Kajang is not only Tioman's highest mountain, but it's also the highest mountain of any island off Peninsular Malaysia's coast.

Read the personal experiences of one of our climbers, Zul, who conquered Gunung Kajang's summit with his band of brothers earlier this year. 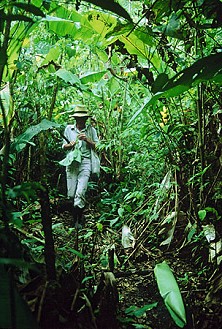 The thrill of exploring primary jungle

The Gunung Kajang mountain is so remote and inaccessible that it can be regarded as the mountain where time stood still, a throwback to hundreds, perhaps thousands of years ago; an untamed, as yet mostly unseen patch of the world, where to this day discoveries are waiting to be made. The mountain is so untraveled, indeed unexplored, that there most of its sectors have no tracks at all. 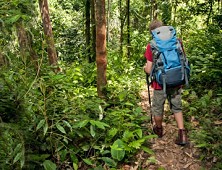 Trekking through one-of-a-kind jungle rainforest
in Tioman, a unique experience!

Gunung Kajang, also known as Palm Frond Mountain has been used as a navigational aid by seafarers for centuries and is mentioned in early Arab and Chinese sailing charts. Biologists have been fascinated by Gunung Kajang for decades. The reason is the evolutionary isolation of the island, as well as its volcanic past, and in particular the effect its violent geological history has had on Tioman's native flora and fauna - the Darwinian Galapagos effect.

Many species of plants and animals on Tioman have become marked off-shoots from their cousins on the mainland. They've become distinct species altogether, now only found on this primary rainforest-covered mountain and nowhere else in the world.

Ploughing up the slope

Other highly elusive animals you may catch a glimpse of when scaling the mountain, that is, if you're quiet, patient and lucky enough, are Colugos, a primitive tree-dwelling mammal that can glide up to 100 meters, as well as porcupines and even a nocturnal species of rare mouse deer. Sporadic observations of wolverines have been documented too.

In fact, over the years there have been enough persistent sightings by members of the local Tioman population of larger predator-like animals to at least suspect the existence on the mountain of one or more as yet unknown species of carnivores.

In addition, Gunung Kajang is also said to be home to the one-of-a-kind Rafflesia flower, noted for producing the largest individual flower on earth and officially recognized by the global Botany community as a "rare flower".

All in all, it's safe to say that this dense emerald mountain is a true ecotourism paradise.

Interested to come face to mountain face with Gunung Kajang and all its mystery? Use this form.