If you're into fly-fishing virtually untouched rivers and streams in a verdant tropical jungle location, then Tioman is the place to be. True, Tioman is still unproven grounds as fly-fishing in Malaysia goes, but therein lies some of the very appeal, doesn't it? 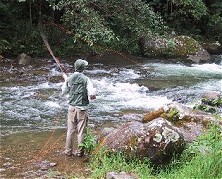 Here, in Tioman's rugged terrain, you'll come across rapids, waterfalls and plunge pools where fly-fishing action has until now, at the very most, been done once or twice - if at all. It's utterly safe to say, in fact, that most fresh-water fish species here have yet to see an artificial fly. 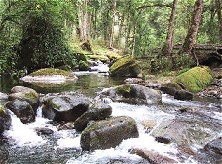 Plenty of hide-outs to coax the fish from

Interestingly, millions of years ago, Tioman was actually part of Borneo. Given Tioman's proximity to the East Coast of Peninsular Malaysia, you'd be excused for thinking our little emerald island is a little spin-off from eastern Malaysia. In fact, over the many years that have passed since it started its glacially-paced migration, Tioman has actually inched its way further and further from Borneo and closer to West Malaysia. 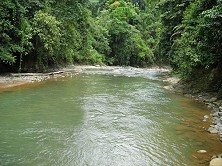 A fly-fisherman's dream come true, a
body of water as good as untouched

Biologists came to this conclusion not so long ago when they realized that a large part of Tioman's flora and fauna shows a fair amount of genetic overlap with their distant cousins in Borneo. In fact, so intriguing do Biologists find this far-flung island that new species of even vertebrates are being discovered by research expeditions to this day. And this makes Tioman almost a kind of throw-back to ancient times. Naturally, this also applies to the freshwater fish that live in Tioman's rainforest-cloaked water bodies, rivers and streams. 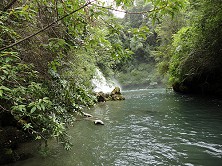 So, if your interest has been piqued and you'd like to go where no fly-fisherman has gone before. If you're keen to explore the fly-fishing potential of Tioman's mysterious interior, then grab your rod and flies and head up to Pulau Tioman now. We'll have a government-endorsed, fully qualified nature guide ready for your expedition by the time you're on the ferry.

Ready for some unique Tioman fly-fishing action? Use below form to send us your details and requirements.