Jellyfish in Tioman play an important role in the ecosystem


Jellyfish may not be our most favorite creatures, because of their tendency to give a little sting. But it's good to realize that any healthy ecosystem should also comprise jellyfish populations, particularly, since several other marine creatures feed on jellyfish, including tuna, shark, swordfish, salmon and sea turtles. So a system where all jellyfish are removed may not necessarily be a healthy system. 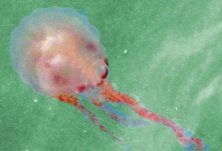 In fact, if you look beyond the jellyfish's annoying stinging habit, you'll realize that, apart from providing a source of food, jellyfish are actually rather pretty and very graceful creatures. In fact, all jellyfish, big and small, are worthy of our wonderment and we should take an occasional sting in our stride.

Anyway, most jellyfish stings are nothing that a little vinegar, warm salt water or chamomile lotion won't cure. Or, at a pinch, if nothing else is available, it's been said that urine also does the trick at easing any stinging sensation and itch caused by a jellyfish sting. 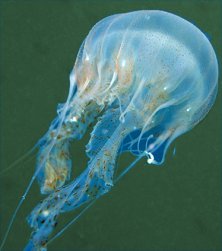 Close-up of a jellyfish of 4 cm in diameter

More ominously, there are a few jellyfish species that are potentially lethal, the box jellyfish being one of these. However, fortunately, there hasn't been a single case of a swimmer, snorkeler or scuba-diver near Tioman being stung by a box jelly fish. Indeed, no box jellyfish, or other dangerous jellyfish species for that matter, has ever been spotted in the waters around Tioman - a comforting thought. 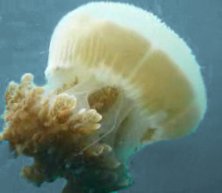 This jellyfish's tentacles are quite short

As far as jellyfish being a stinging nuisance around Tioman, generally, jellyfish are so few and far between in the Tioman area that they're hardly an issue at all. Sporadically, there may be a modest bloom of very small jellyfish of 1 centimeter or less. Alternatively, you may spot a solitary specimen of between 5-10 centimeters in diameter. But the jellyfish species around Tioman tend to not be a big problem at all. Just bring some antihistamine ointment along to ease the itch in case someone gets a little nip and things will be just fine.

In short, swimmers and snorkelers can enjoy Tioman's waters without needing to worry about jellyfish.

If you'd like to know more about our jellyfish species, or if you want to come face to face to our coral reef's other beautiful inhabitants, then use below form.

Yes, I'd like to go diving along Tioman's coral reefs. Please send me more details.