Stand Up Paddling in Paradise


SUP, or stand up paddling, has been gaining a lot of traction in both the surfing community and the general world of watersports for some years now. One of the main draws of SUP is its easy learning curve, with beginners becoming comfortable in as little as an hour of training. In addition, because it's all about technique rather than raw strength, stand up paddle boarding is equally popular with men, women, as well as with kids. 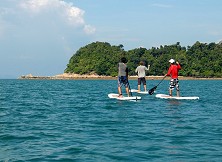 Once the SUP boarder has found his or her range and balance has become intuitive as opposed to reactive, SUP paddling is the ultimate watersport activity. SUP is not only great for your body, but for your mind too and the reason is that SUP paddling is usually done in a natural and relaxing environment, such as the sea. 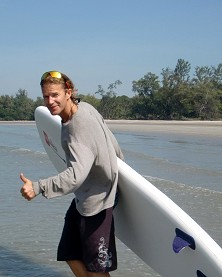 Heading out for a Tioman SUP session

If you feel like getting some low-impact all-body exercise, whilst enjoying being out at sea, nothing beats a tranquil session on a stand up paddle board. It just so happens that Tioman has dozens of locations, near and far, to choose from if you're looking for a solid paddle work-out, followed by a gorgeous Bounty beach setting as your reward. Not only will you love the obliques and arm/shoulder muscle pump, but you'll be instantly smitten by our awesome Bounty-island scenery too. 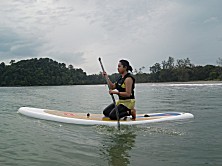 Getting the SUP basics down
before venturing out

In fact, once you're out there with your friends, at sea, with nothing but a few inches of buoyancy separating you from the calm turquoise water below, lapping at your feet, you'll be hooked by the sense of freedom and space. The feeling is part electrifying buzz and part ultimate serenity. And the distant almost hypnotic din from the immense wall of Tioman's green mountain jungle backdrop just adds to this unforgettable experience. Stand up paddling off Tioman is an absolute bucket list entry, a must-do. 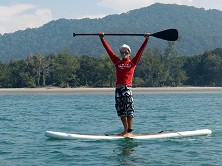 Those feeling particularly intrepid can SUP from Kampong Tekek to Coral Island, a good couple of clicks or so, certainly doable for most SUP regulars, especially since the waters around Tioman tend to be fairly flat and friendly (apart from the monsoon months, November until February). And don't be surprised if a few playful bottle-nosed dolphins poke their heads through the surface to take a closer look, because Tioman is home to quite a few ever-curious pods of dolphins. [Edit: Do play it safe by having a powerboat follow you]. 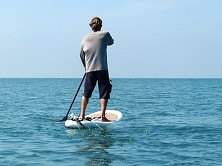 Keen to stand up paddle in tropical paradise? Use below form to reserve your SUP board.