Most travellers are aware that Tioman Island is surrounded by a gin-clear sea chockablock with coral gardens and exotic flora and fauna. Apart from regular scuba divers, EANx diving aficionados from around the world are drawn to Tioman's waters in particular, because Tioman offers a good number of spectacular reefs, both coral and artificial, that happen to be just about ideal for EANx divers. By the way, for the as yet uninitiated, EANx diving is another word used for Nitrox diving.

The main reason that some of our deeper reefs are such a major draw for EANx divers isn't only because of the extreme clarity of our waters and the wealth of marine life that inhabit these sites; the other reason is Tioman's water's quite balmy temperature and quite friendly currents.

On average, twice a year our dive center has available a rather comfy and fully-equipped dive boat for an amazing 4-5 full days EANx diving trip to far and away the best WWII wrecks in the immediate Tioman Island area. The objective of these EANx Diving trips is to dive to half a dozen or so of the documented WWII wrecks, including HMS Repulse and HMS Prince of Wales. Obviously, we strive to experience EANx diving at its most awesome. 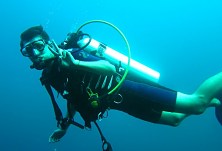 Get your PADI Open Water scuba
licence in just 3 days!

Now, so as to be able to spend as much of our daylight to diving as we can, most of the site-to-site boating will be done at night. In effect, we'll be emulating the very ships that we'll be dropping down below to. So you'll see what it is the crew of those ships saw. In fact, nocturnal sailing was one of the oft-used methods during the war in an attempt to keep the vessels from being discovered by enemy destroyers, planes and submarines. Bottom line: for many of our EANx divers, this unique experience of sailing Tioman's history-laden seas during the cover of night was the icing on the cake of the trip

For our EANx excursions, for obvious reasons, we require a minimum of EANx Diver Certification. Please note that our EANx Diving trips are typically fully booked well in advance.

Use below form to inquire about our EANx courses or to get the detailed schedule of our next EANx Diving trip.